These are the words of evangelist Ilona Henry Afamefuna, detailing his missions work in Africa (Ivory Coast) as of October 27, 2004.

Warmest greetings from calvary in Jesus most wonderful precious name.

It is my greatest joy to be a minister of our Lord Jesus Christ.

I want to use this opportunity to tell you all what God did when I went to Agnibeilekrou to preach the word to the people there. Beloved,it wasn't easy at all, because the enemy fought tooth and nail to see that I was hindered, but we all know that nothing withstands the Spirit of God. I left Abidjan to Agnibilekrou on 9/26/2004. When I reached there, I had to undergo one week of fasting and prayer to prepare myself and the area for the battle ahead. The Lord confirmed the fasting by revealing to me in a night vision in the sixth day of my fasting and prayer that the strong man of that town is overthrown. After the fasting and prayer period, I took my megaphone and started preaching in the open air with the message of repent for the kingdom of God is at hand, let each and everyone of you forsake his evil ways and come back to God.

Beloved, Agnibilekrou caught on fire for Jesus. The people came out and were looking with an utter amazement at a young man preaching publicly in the open air with a megaphone. Beloved as I was preaching, the Holy Spirit was at work convicting the people of their sins and wickedness. Beloved,let me tell you, Agnibilekrou is a witchcraft dominated area. If not the Lord who is always with me, I would have been stricken by the enemy, because even in the midst of all these things, some of the people came out openly and were opposing me. But despite their threats, the word of God in my mouth was waxing hotter and hotter, that not one of them was able to stand. Every where I went, in the market, on the streets, on the road side and houses, I was sharing tracts, booklets and other gospel materials to the people, telling them about the kingdom of God. I prayed for the sick and all them that were oppressed by the devils and the Lord touched their lives. For a complete two and a half weeks,I was on fire preaching the gospel to people of Agnibilekrou. Many lives were touched through the word that I preached. I also prayed for some families who were suffering curses and the Lord moved in their lives. Some people who were not going to church or had stopped going began again to attend church.

After the two and a half weeks, I rested for some days, because I was preparing now to go and preach in some of the villages at Agnibilekrou. The first village that I went to was called Assuame. Beloved, I could not believe what my eyes saw when I arrived at this village. At the entrance of the village, I was confronted by the strong man. The Holy Spirit spoke to me and said, "Henry begin pleading the blood of Jesus." Immediately I began pleading the blood of Jesus. As I was pleading the blood, the evil presence dissapered. The whole witches and wizards came out and stood at their house door post waiting readily for me. But as I began preaching the word, they all fled away and went to hide themselves inside their houses (who can battle with the Lord)?

As I was preaching, I came to a place, immediately the Spirit of the Lord came upon me and I started saying, "there is a man here whom the forces of darkness have bound in poverty, hardship, poverty and sickness." Immediately the man came out and said to me, "I am the person. Please help me. Please help me I am dying." I told him, "I can't help you. Only Jesus can help you." Beloved, almost all the teeth of this man have gone as a result of drunkeness. As he was talking to me, his mouth was booming with alcohol. When he took me to his house, I saw poverty in full manifestation. When I say poverty, I mean poverty. As I began praying for this man, the power of God fell upon him and he started crying and shouting. Immediately the Holy Spirit spoke up through me and said, "you fowl spirits come out of him now in the name of Jesus." Immediately the fowl spirits yelled and went out of him. He was delivered. It was after he confessed to me that he was a Christian before, but on the way he backslid and began to live a horrible lifestyle. When the people saw what happened, they were sore afraid. Beloved, could you believe that there is no church in this village? Only one small catholic church. That village is full of witchcrafts. None of them goes to church, because there is no living church in that village. After preaching, the youths begged me to come and establish a living church for them. I saw witches and wizards with my two naked eyes. The villagers were begging me to send them bibles, because they are too poor to afford even a new testament. Because of the limitedness of my finances I could not do anything for them. I promised them I will come back in December time to plant a living prayerful and deliverance church for them.

Please, if any of you feel led to donate a bible, please don't delay in writing me. The bible needed is the french bible. Please don't send new testament. Send complete bible(Old and New Testament). Don't send used bibles, send quality bibles. I need much materials in the french language. If you know of any, please contact me.

After Preaching in Assuame, I glorified God. The churches in Agnibilekrou are dead and weak, full of religious teachings and human dogma. No evangelism, no visitation. Brethren, you need to come and see things for yourself. After my evangelism trip to Assuame, I rested for another three days preparing now to go to another village in Agnibilekrou called Dame. Beloved, my evangelism trip to Dame was not an easy one, for I was confronted by the powers of darkness, but God gave me victory again. When we reached Dame village, it was on Friday the main market day. I did not believe what my very eyes saw, almost the whole village is given to wichcraft practices and idloatry. In this village, there is a very big mosque with one catholic church. I don't know if there is any true living church there, except baptist church, but this church is not spiritually active. After some minutes rest, I opened my megaphone and started preaching as usual. The whole market was bewildered as I preached Jesus Christ to them. Beloved, could you believe that the demons in this village came out to fight me, using the market people, especially the market women. As I was preaching, they were seriously opposing me, saying "go to your own country and preach, don't disturb us here" (but I know it was the demons in them speaking). The Holy Spirit spoke to me and said, "keep on preaching the gospel and don't listen to them." I thank God for the brother He used for me. This brother is a real soldier of the cross. I was giving them tracts, but they refused the tracts and booklets that I was giving them. The Holy Spirit spoke to me again, "don't be discouraged. Keep on. I am with you." After two hours of ministering, as I came back to where we packed our load to have a rest, brother Mike came to me and said, "do you still have some materials in the french version with you?" I asked him why. He said that as he was using the Chick publication booklet titled, The Film Of your Life, translated into the french, Le Film De Votre Vie, those market women who refused to take tracts from me sourrounded him and were listening to him as he talked to them in the native language. I immediately followed him. When I reached the spot, all of them came running towards me saying, "more tracts, more tracts." I asked why they refused to accept at the beginnig. They said, "because you were shouting."

I will be including the pictures of my evangelistic activities in Agnibilekrou for your personal viewing. After all that, I now began planing to come back to Abidjan. Beloved, the people of this country are in real darkness. I am begging each and everyone of you to help me in any way he/she could so that the people will hear the word. The people at the interiors are very poor. They were begging me to send them bibles and other christian literature. In some of this villages there are no churches. That will tell you how spiritually dark the interior area of this country is. I need materials for this work and also financial assistance. Please in any way you can help, I want you to write me back. I need french and english materials, but mostly french materials. Very soon, I will be moving to another interior town of this country called SanPedro or Bouake to go and preach the word there. I will need bibles in French and English version (Old & New Testament copies) books, booklets, tracts, Palmphlets, etc. Beloved, I want you to take a look at the pictures so that you can understand what I am saying.

There are three things that I need now, which are very important in my out reach.
1)A portable Video Camera.
2)A portable Photo Camera.
3)A Portable Megaphone.
The Holy Spirit has laid in my heart to be videotaping all these things for future references. Beloved, no body is supporting me in this work. I do it on personal risk, living by faith. Beloved, I repeat again, Ivory Coast is still in darkness and needs the light of the gospel. I will be going back to Agnibilekrou in December time to go and plant churches in those villages where there are no churches. But before that, I will be going to two or three places in the interiors to evangelize before going back again to Agnibilekrou. The people asked and begged for bibles, and the bibles I need are the french bibles, because the people of Agnibilekrou speak french with few english people.

From there I will be going to Domagnikrou, a village in Ghana, it is the border between Ivory Coast and Ghana. There I heard there are no living churches. I will need english materials like: English Bibles (Old & New Testament), books, booklets, tracts, pamphlets, etc. Please I need English and french materials, but especially french materials. There is a book I will like you to donate to me. We have it in English and French language. The book is written by John Blanchard, titled, ULTIMATE QUESTIONS. I need this book in English and French. Any quantity you can send will be appreciated. Please send both the english and french version, especially the french version is higly needed now, as I am focusing much on the french people.

Please remember me in your prayers, that God you should meet all my needs.

I will be very happy to hear from you.
God bless you all.
Maranatha. 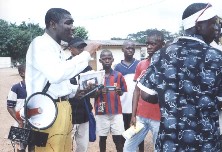 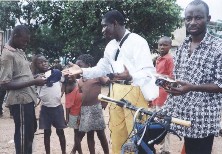 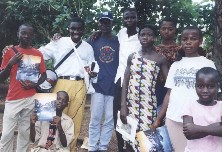 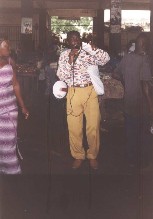 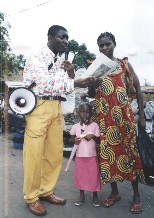 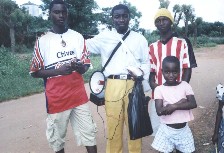 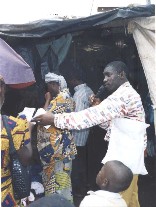 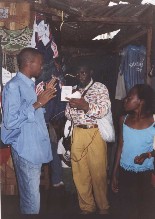 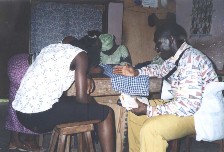 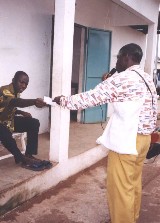 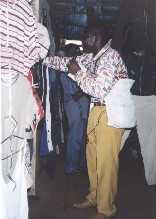 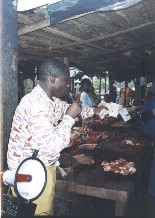 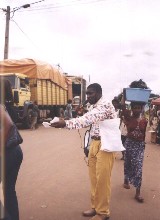 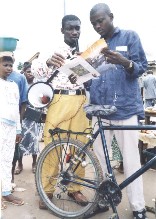 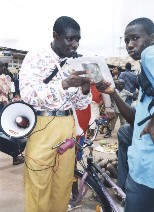 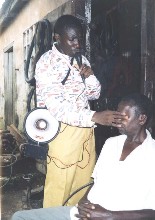 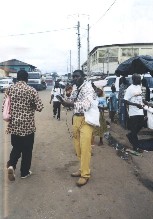 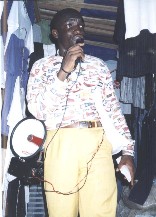